Posted by Alexandra Rogers
Cho's Variety in Williamsburg, Brooklyn is a coffee shop with an excellent french press and a bakery counter full of delicious muffins from Blue Sky Bakery (so delicious, in fact, they inspired these). For many people in the neighborhood, that might be all it is. To me, its a lot more. See, I found Cho's Variety on my first unemployed day in New York City. It was a Wednesday morning--I'd flown to New York City jobless, with a one-way ticket the night before. The friends I was staying with in Williamsburg had jobs to go to on Wednesdays, so that morning I wandered out of the apartment with my laptop and wallet and frankly, a lot of spare time. I "discovered" Cho's Variety-a packed coffee shop on a main street-and it instantly became my spot. I used the wifi there to constantly search for jobs. I forced friends meet me there, insisting I'd found a hidden gem. I even paid my friends in muffins and coffee from Cho's the morning they came to help me move from Brooklyn to my very first apartment in New York City (yes, it was a fifth floor walk up...and yes, they did deserve a lot more than muffins and coffee). 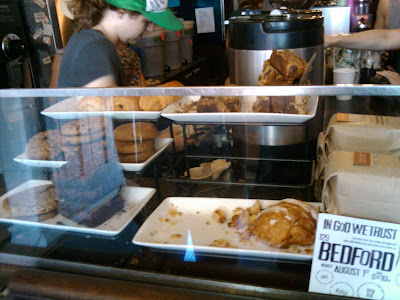 That was about two and a half years ago. In the grand scheme of things, two and a half years is not a lot of time. Yet today, as I found myself back in the Cho's Variety neighborhood, I realized that even though the french press tastes the same, almost everything else in my life is different.

Isn't it funny how certain spots in your city or a walk along a certain route in an old neighborhood can force you to pause and remember a different time?

Very little has stayed the same since the first time I crossed the threshold of that little coffee shop. The couple who so generously let me stay with them in my first two months in NYC, who made me tea when I was upset in those rocky first few months and introduced me to their friends and New York favorites--they've gotten engaged and married in the last two and a half years. The friends who helped me move apartments in exchange for muffins have either moved away from the city in pursuit of other dreams or have become legitimate New Yorkers--no longer newbies in a big, unknown city. And of course, I'm different too. Relationships have changed, plans have changed. Paradigms have undeniably shifted. 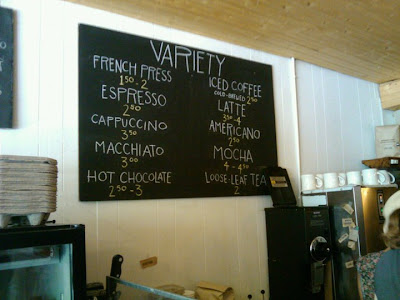 I found myself smiling about it all today, as I sipped my french press out of the small paper cup with the variety stamp on it. Because, while it's true that I probably can't tell you what my life will look like in two and a half years, I feel fairly certain that the french press at Cho's will be unchanged.
1 comments

Email ThisBlogThis!Share to TwitterShare to FacebookShare to Pinterest
Labels: Food For Thought

Posted by Alexandra Rogers
You may have noticed some silence as of late, on flavorfull. For that, I am truly sorry. I won't bore you with my long list of excuses because, mostly, the excuses amount to me getting home at 8 or 9 and feeling very tired and incapable of cooking, photographing and writing about a meal. A lot of times I'm quite tempted to simply order Thai food again from the place around the corner. (A lot of times, I give into that temptation, too.) 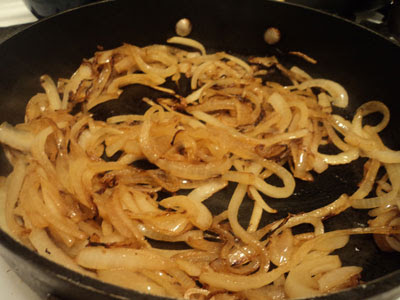 I felt, at first, ashamed to admit this, given my love for cooking. But then I thought, it's possible that my readers wish they could cook more too. I mean, I cannot be the only girl in the world who loves to cook but consistently sees gourmet groceries go bad in her fridge. So, with that in mind (and just in case you've struggled with something similar) let me offer you my new favorite pantry staple recipe. 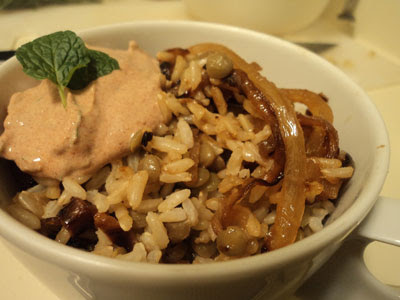 This meal is made with almost all things you can keep in your pantry, so if all of your ingredients go bad during a busy week or you're so busy you can't find time to go grocery shopping for proper produce you can still eat very, very well. Mujaddara also gets better with a little time, so it's ideal to make this on a Sunday and bring it to work as lunch on, say, a Tuesday.  Plus, when paired with steamed green veggies, it's a very nutritious meal.

Mujaddara
Adapted by Alexandra Rogers from recipe on Food52.com

Recipe
Cook rice and lentils according to instructions, set aside.

Divide onions in half. Heat oil in a large saute pan, and add half of the sliced onions once the oil is hot. Cook onions over medium low heat for 10-15 minutes, until caramelized (adding oil in small amounts if pan dries out). Repeat process with second batch of onions (alternatively, if you have two large saute pans you can do this step at once on two burners).

In a large bowl, combine rice, lentils and onions and stir to combine. Serves 4.

Posted by Alexandra Rogers
Happy New Year, my friends! I am employed full-time back in NYC now, which means you can expect healthy, simple, inexpensive and fairly quick-to-prepare meals out of this blog (and quite a few more restaurant recommendations and write-ups). This sweet potato hash recipe, is one of my all-time favorites, a go to comfort food that's easy to make and easy to prepare ahead of time. In fact, if you have any cubed sweet potatoes left over from making your Superfood Soup, you can use them here. 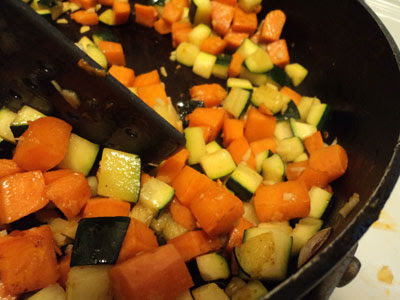 The best thing about this dish is all the possible ways you can take it. This year, I've heard many of my colleagues (especially those my age) tell me that they wish they could cook, but they just don't know how. I think the key to confidence in the kitchen, to moving beyond heating water for spaghetti or mac & cheese, is learning basic recipes that you can slowly learn to modify. This sweet potato hash is a learn-to-cook dish if I've ever seen one. Once you get comfortable with the textures and timing of this recipe, feel free to chop other vegetables the same size and saute them along with everything else. Certain choices will probably fare better than others, so I've listed out some "possible add-ins" for you under the recipe. Another great thing about this recipe? It is vegan-friendly, and you can serve it for breakfast, lunch or dinner! Enjoy. 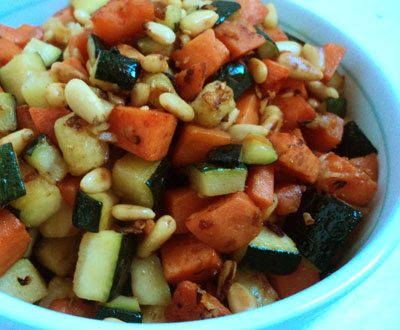 Recipe
Heat enough oil to coat the bottom of a large saute pan over medium-high heat. Once the oil is hot, add sweet potatoes. Cook the sweet potatoes for approximately 3 minutes. Add zucchini and cook for 5 minutes, stirring infrequently so the vegetables have the opportunity to caramelize a bit. At this point, the sweet potatoes should be almost tender--able to be pierced easily with a fork. Add the garlic, cumin, cayenne, salt, pepper and pine nuts and stir to combine. Cook for at least 3 minutes, until garlic softens and cooks  a bit, and until potatoes are tender enough to eat. Serve hot. Makes 2 servings. 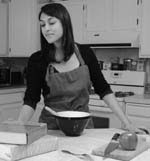